The WOMAN Who BREATHED Two WORLDS 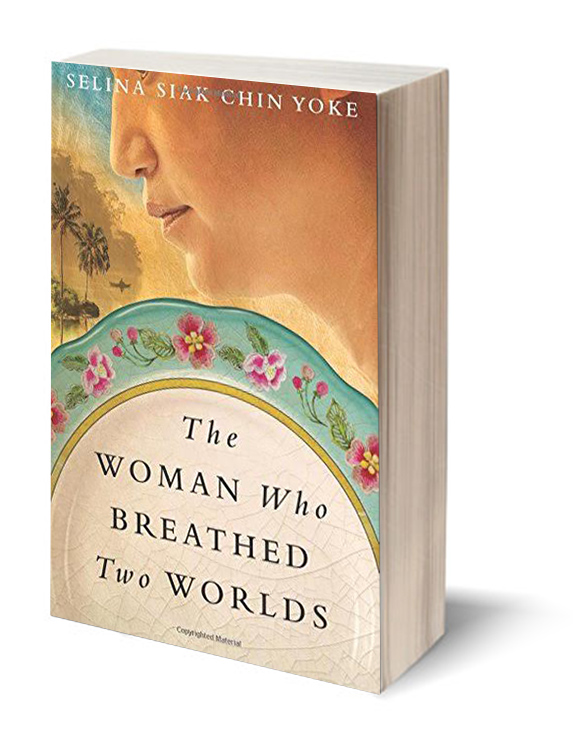 Facing challenges in an increasingly colonial world, Chye Hoon, a rebellious young girl, must learn to embrace her mixed Malayan-Chinese identity as a Nyonya—and her destiny as a cook, rather than following her first dream of attending school like her brother.

Amidst the smells of chillies and garlic frying, Chye Hoon begins to appreciate the richness of her traditions, eventually marrying Wong Peng Choon, a Chinese man. Together, they have ten children. At last, she can pass on the stories she has heard—magical tales of men from the sea—and her warrior’s courage, along with her wonderful kueh (cakes).

But the cultural shift towards the West has begun. Chye Hoon finds herself afraid of losing the heritage she so prizes as her children move more and more into the modernising Western world.

Here’s a video of me reading an excerpt from the book, animated by old images of the town in which the book is set.

Some stories transport you across the world and through time to places and experiences otherwise unreachable. Like The Joy Luck Club by Amy Tan, The Woman Who Breathed Two Worlds did exactly that, allowing me to see through the eyes of young Chye Hoon, a girl of mixed Chinese-Malay heritage in late nineteenth-century British Malaya (currently Malaysia), and keeping me transfixed by her life’s journey until I closed the book some hours later.

My senses were bewitched by descriptions of sizzling garlic and burbling coconut milk, just as the portrayal of the young girl dreaming of her ancestors’ swords captured my heart. By the time Chye Hoon leaves girlhood behind and takes up the mantle of matriarch, I was deeply committed to following her destiny and that of her children, all struggling to find a place in a world that is increasingly shifting towards the West.

Loosely based on her own family, each of author Selina Siak Chin Yoke’s characters breathes on the page. My heart broke for them as their worlds changed forever, their dreams morphing as they acclimatized or succumbed to the forces of colonialism. The overriding message is one of hope and survival, and the book is a testimony to the power of food, friendship and family.

Praise for THE WOMAN WHO BREATHED TWO WORLDS:

"In this vividly drawn, deeply affecting first novel, a spirited girl who is forbidden to attend school as a child is inspired by the warrior myths of her ancestral past told to her by her mother.  Though uneducated, Chye Hoon goes on to forge her own destiny as a cook, famed for her savory kueh cakes. Author Selina Siak Chin Yoke's special magic draws us instantly and poignantly into Chye Hoon's epic struggle to preserve her family as well as her vanishing culture."

--Laura Esquivel, author of Pierced by the Sun and the New York Times bestselling Like Water for Chocolate

Selection of Readers’ Comments on Amazon

“One of those books you hope will never end and you feel bereft when you reach the final page. Excellent story, beautiful writing.” (Oct 10, 2016)

“The rhythm of the words, the flow of the story, the tales that were shared - it all seemed so real. It's been a long time since I've read a book that tugged at my emotions, culminating in tears for a woman I felt I had grown to know.” (Oct 14, 2016)

“They say books are gateways to other places, this certainly was one of those and I encourage you to step through, you will not be disappointed.” (9 Nov, 2016)

“This is one of the best books I've read in a long time. Wonderfully written. I felt like I was right there feeling her every emotion, imagining the food and atmosphere and really empathizing with the characters. Highly recommend this book.” (Nov 18, 2016)

“Historical fiction reminiscent of Pearl S Buck's the Good Earth, this beautiful tale about a woman who gave every ounce of her life force for family is a delight to read. I could not put it down.” (Nov 17, 2016)

“Read it and you will identify with this woman who could have been anything she wanted, but for the time she was born in. I love her and her courage and I smile at her humor in the face of catastrophe and I thank her story teller for bringing us her story.” (Dec 9, 2016)

The Woman who Breathed Two Worlds is available to purchase online and at book stores worldwide, including the following:

This reading group guide for The Woman who Breathed Two Worlds includes discussion questions and ideas for enhancing your book group/club. We hope these suggestions will provide interesting angles of conversation and enrich your enjoyment of the book.

In this compelling debut novel, author Selina Siak Chin Yoke draws the reader in to the world of the book’s heroine as she journeys through life. Along the way she meets a memorable cast of characters. The protagonist, Chye Hoon, is herself strong and flawed but lovable, and inspiring in the inimitable way she overcomes cultural limitations, male domination and adversity.

A warmly human story, The Woman who Breathed Two Worlds (Book #1 in the Malayan Series) takes on complex themes – identity, cultural change, tradition versus modernity and inter-generational conflict – while remaining accessible to the reader. Its rich descriptions of food, family and friendship have already gained it accolades from fans, many of whom have compared it to Pearl S. Buck’s The Good Earth and Amy Tan’s Joy Luck Club.

1. Have you read other novels set in Asia? In what way does The Woman who Breathed Two Worlds differ from other novels for you?

3. A unique aspect of this novel is the way in which the author has chosen to change word order in parts of the dialogue. Did her use of colloquial dialogue help situate you more profoundly in Chye Hoon’s world or did you find the dialogue jarring? Discuss.

4. What are the lessons you took away from this book?

Siew Lan muttered a protest, which I ignored. ‘Yes, I tell you! They look at me, they not really look – like I not there at all. Like I just thin air in front of them, invisible.’”

The conversation above, between Chye Hoon and her best friend Siew Lan, takes place shortly before the latter’s marriage to Stuart McPherson. Have you ever felt invisible in your own life? Conversely, have you had feelings of condescension towards members of the local population while travelling through non-Western countries? How do you think they felt about you?

6. Discuss the similarities and differences between Siew Lan and Chye Hoon. To what extent do you think Siew Lan was able to influence her friend?

7. Chye Hoon’s struggle to adapt to creeping Westernisation is epitomised by her suspicion of Western medicine and hospitals, especially where childbirth is concerned:

“In any case, babies were different: I could see no reason for not having them in the comfort of one’s own home. I had once had the misfortune of stepping into a hospital when I visited a sick Nyonya who was one of my customers, and I couldn’t imagine the indignity of lying in such a large room among strangers, being barked at by a doctor, a man, who told you to push . . . pu-u-sh . . . without ever conceivably knowing what your pain must feel like.”

Do you think her views have any validity?

8. What, if anything, in this novel surprised you?

9. Chye Hoon worked hard to feed, clothe and house her children but she failed to mould their characters. Do you agree or disagree with this statement?

10. The relationship between Chye Hoon and her eldest son, Weng Yu, forms a central focus in the story. Discuss her reaction when she learns of his attachment to a white woman, Helen, in the context of what you know about the world in the 1920s. What would you have done in Chye Hoon’s shoes?

11. By the end of this book, do you believe that her eldest son, Weng Yu, has become a reformed man?

12. “A world without Nyonyas or Babas? I couldn’t imagine, though I knew what Siew Lan meant. The world was changing; life moved quickly, and people rushed more than they did when I had been a child in Songkhla. I didn’t like how we had less time for one another, how we kept to ourselves instead of reaching out as our ancestors had done.”

The above passage represents Chye Hoon’s thoughts in the early twentieth century, but part of it could have been said today. Can you find parallels in your own life to the ways you have had to accommodate cultural change?

13. Which were your favourite characters in this novel and which did you like least? Why?

14. What were your thoughts when you first heard the title of this book, The Woman who Breathed Two Worlds? Do you think this is a good title?

15. To whom would you recommend The Woman who Breathed Two Worlds and why?

1. Consider reading the second book in the Malayan Series, When the Future Comes Too Soon, and discussing it in your group.

2. Choose any subject(s) mentioned in this novel that you are curious about – the temple in the caves, betel-nut chewing, even the midwifery techniques –and, together with your group, gather as much information about the topic as possible and discuss with pictures. Read through the author’s blog-posts to see if anything has been posted on the subject. Also check the Chye Hoon’s World page on her website.

4. Either (a) spend an afternoon with your group trying to make one of the kueh described in this book (check the author’s website for suggested recipes) or (b) hold a book group meal in a Malaysian restaurant or (c) do both!

5. Connect with Selina Siak Chin Yoke on Twitter, Facebook or her website and invite her to join your book club discussion of The Woman who Breathed Two Worlds, either in person or virtually – she would be honoured to participate if her schedule permits. Even if she cannot join you, send her any questions you may have and she will do her best to provide answers. Follow her on Amazon to receive updates on upcoming the books in the Malayan Series!