WHEN the FUTURE COMES TOO SOON 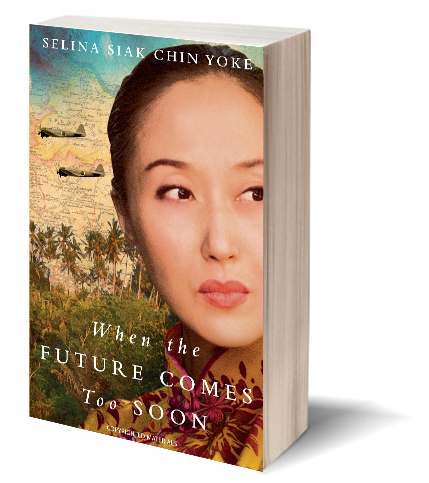 In Japanese-occupied Malaya, lives are shattered and a woman discovers her inner strength in a world ravaged by war.

Following the death of their matriarch, the lives of Chye Hoon’s family are turned upside down. Now that the British have fled and the Japanese have conquered, their once-benign world changes overnight.

Amid the turmoil, Chye Hoon’s daughter-in-law, Mei Foong, must fend for her family as her husband, Weng Yu, becomes increasingly embittered. Challenged in ways she never could have imagined and forced into hiding, Mei Foong finds a deep reservoir of resilience she did not know she had and soon draws the attentions of another man.

Is Mei Foong’s resolve enough to save herself, her marriage, and her family? Only when peace returns to Malaya will she learn the full price she must pay for survival.

"An important corrective—as well as an exciting read...Stirring and realistic, When the Future Comes Too Soon is a dynamic examination of the Japanese attack on British Malaya and the tenuousness of love in war, told from the rare perspective of local Malayan-Chinese." — Asian Review of Books

"The British have abandoned Malaya (as it was then known), and the Japanese occupation has begun. Mei Foong cherishes Malayan and Chinese culture, telling her children classic Chinese tales to imbue them with the sense of their classical past. Her life seems bleak until she meets Chew Hock San, who helps her and her children during a surprise bombing…This is a novel of survival and love...excellent historical fiction!”  — Historical Novel Society

“Every scene of horror that Siak describes is extremely vivid, lingering in the reader’s mind as the full scale of what the people of Malaya went through as Japanese forces increased their influence in the war. But equally, at the centre of the story is the struggle of Mei Foong in an attempt to keep her family together.” — Love London Love Culture

"This isn’t just a story of survival; it’s a tale of love during wartime, of wavering loyalties, and of Malayan and Chinese culture. A thoughtfully written book with a very human touch." — Culture Fly (recommended in Dec 2017 as one of 10 best gifts for bibliophiles)

“This WWII-era novel shows the war from a viewpoint we don’t usually get in novels: that of a Malayan woman whose town has been bombed. The story is one of heartbreaking family drama and female power.” — Lara Bryn’s Book Club, one of 10 top picks for 2017

Praise for WHEN the FUTURE COMES TOO SOON:

“As Malayan society grapples with the changes brought on by war and occupation, Mei Foong barters away pieces of her existence in order to survive, and rebuild and reclaim her life. She must finally contend with the realization that one could only wholly reclaim oneself by acts of self-assertion requiring greater courage than needed merely to survive. When the Future Comes Too Soon by Selina Siak Chin Yoke is an intricately drawn network of human relationships.”

"Selina Siak Chin Yoke has created an intensely visceral evocation of life in Malaya during World War II, when a young wife and her family confront the harshness of life under the Japanese occupation and the ethnic polarization it causes. Mei Foong is a hauntingly original character, torn between loyalty to her family and the risk of betrayal—a woman who fatefully defies the constricting conventions of her society.”

—María Dueñas, author of New York Times bestselling The Time in Between

When the Future Comes Too Soon is available to purchase online and at book stores worldwide, including the following:

This reading group guide for When the Future Comes Too Soon includes discussion questions and ideas for enhancing your book group/club. We hope these suggestions will provide interesting angles of conversation and enrich your enjoyment of the book.

In this powerful and haunting novel, Selina Siak Chin Yoke once again immerses the reader viscerally in her characters' world.

When the Future Comes Too Soon (Book #2 in the Malayan Series) follows Mei Foong, who is married to the eldest son of the Wong family matriarch depicted in The Woman who Breathed Two Worlds, while she and her family adapt to the harsh reality of a country under Japanese occupation. As order and racial relations break down in Malaya, so does the relationship between Mei Foong and her husband, Weng Yu. With the entrance of Chew Hock San, a man who appears besotted with her, Mei Foong finds herself conflicted.

When the Future Comes Too Soon is a novel about the nature of personal choice and responsibility, and the meaning of fidelity and betrayal – narrated by an ordinary woman whom many of us can relate to.

1. There have been many novels set during World War II. In what way does When the Future Come Too Soon differ from other novels you have read in which war served as a backdrop?

2. What do you feel you have in common, if anything, with the protagonist, Wong Mei Foong, and with her husband, Wong Weng Yu?

3. “As our eyes met across the desk, I knew that nothing could ever be the same again. I wished later that I had seized the moment rather than letting it pass. But when it came, I could not find the courage to ask whether he loved me.”
One of the recurrent themes in the novel is that of missed opportunities. What do you believe that Mei Foong could have done differently?

4. Describe the relationship between Mei Foong and Weng Yu at the start of the novel and how it evolves as the story progresses.

5. Wong Weng Yu believes himself to be, and is regarded by those around him, as a thoroughly Westernised man. Do you agree, and why or why not?

6. Discuss how the different characters react to the imminent disappearance of their British rulers and the sudden imposition of a Japanese regime.

7. What did you find most surprising in this novel?

8. “Under the Japanese there was little sense of night and day, of right or wrong; no sooner did dawn break, than dusk settled. Time marched forward as it always had, but we were numb to its passing.” Has your view about the behaviour of the Japanese Army during World War II changed in any way through reading this novel?

9. Describe your reactions to the growing friendship between Mei Foong and Chew Hock San.

10. To what extent do you believe that Mei Foong is responsible for her predicament at the end?

11. What do you think fidelity means in a relationship? In your opinion, does society hold women and men to different standards?

12. Betrayal is another theme in When the Future Comes Too Soon. Discuss the instances of betrayal in the story. Do you believe the British betrayed Malaya?

13. Do you think that Mei Foong will finally disclose to her children what she has kept from them for so long?

14. Discuss the title, When the Future Comes Too Soon. Is this a good title? What would you and members of your group have chosen?

15. What do you feel you have learnt by reading this book?

16. To whom would you recommend When the Future Comes Too Soon and why?

1. Consider reading the first book in the Malayan Series, The Woman who Breathed Two Worlds, and discussing it in your group. Can you trace any lessons that each of Mei Foong and Weng Yu learns in the course of each novel?

2. Spend an afternoon with your group taking an introductory lesson in Chinese calligraphy.

3. Plan a viewing of the History Channel documentary, Rising Sun over Malaya, with your group to get a sense of what Malaya was like during the war (NB there are disturbing scenes of a graphic nature).

4. Go armchair travelling with a map of Peninsula Malaya and pin all the places mentioned in this book. Think about the distances travelled by the Japanese army as it marched down the country. If you had been in Mei Foong’s shoes, what would you have done?

5. Connect with Selina Siak Chin Yoke on Twitter, Facebook or her website and invite her to join your book club discussion of When the Future Comes Too Soon, either in person or virtually – she would be honoured to participate if her schedule permits. Even if she cannot join you, send her any questions you may have and she will do her best to provide answers. Follow her on Amazon to receive updates on upcoming the books in the Malayan Series!